Digital morphology is the study of form using computer tools. We did a project last semester to explore the creation of new forms that might have architectural uses, with Autodesk’s 3dsMax software as the basic tool.

My exploration started with the way sails move in a wind field as boats tack into the wind. The movement of the sails was the starting point, and then we looked at ways of perturbing the surface, based on the characteristics of parts of the surface. I think this is still an early exploration, but I learned enough that with a suitable project I think I could use these tools to create something interesting and relevant.

Sadly, we don’t have many pictures of ourselves sailing Yamkatâ€”our 30′ Richard Woods catamaran. Here are a few from our very first sail, when we all had a chance to try her out, and the boys enjoyed taking the helm, and exploring the huge trampoline forward, from which they could see their reflections in the water (and no doubt other things of great interest…). 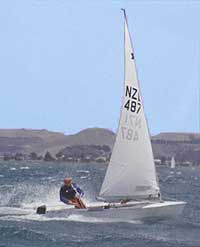 I was out walking in Bourne End last week while in the UK, and I was surprised to see a clutch of OK dinghies – 4m sailing dinghies – sitting on the grass by the Thames. This is a boat I used to sail when I was a teenager in New Zealand. It’s a single-hander, quite challenging, and lots of fun. Standing around were a group of people with name tags. It turns out this was the official 50th birthday party of the boat!

I gate-crashed the party, and secured an invitation to sail in an informal race as a result of the kindness of one of the sailors there. After rushing away and borrowing some clothes I came back and with some trepidation launched myself into the river. The thing about these boats is that the boom comes very low – in my old boat it would actually touch the deck. The implication of this is that you need to be flexible and quick to avoid cracking yourself with the boom, or getting it caught on your head or life jacket – usually with disastrous consequences.

I discovered that while I could still sail the boat, I am far from competitive, and made a rash of mistakes that led to a less than stellar result in the race. Still, I beat a number of people, including a few who sail those boats regularly at that club, so not too bad, I guess. And I should mention perhaps that a few of the sailors are in the top 100 worldwide, so I think I did OK. To my chagrin I found that after the race was over, and the boat returned to its owner, I was so stiff and sore I could hardly walk! But it was well worth it, and a serendipitous pleasure on the last day of my trip to the UK.

…I should point out that the picture above is not of me…but I may be somewhere in this one which was taken on the day, prior to the rather messy start of our race.

After a busy week we all went up to Redwood City and spent a couple of hours out on the water in a Merit 25. The boat is apparently based on the J24, but has better accomodation and is more of a cruiser. The boys enjoyed taking the helm and helping with the rigging, and of course sitting on the bow getting wet as we surfed down the waves!

It was surprisingly warm, with moderate winds and waves. Nice to be out on the water again, even if in a very tender monohull (half-cat). Two hours really only gives enough time to go out and come back – tacking out, running back – although the wind changed a bit on the way back in and we ended up close-hauled for a while and had to tack up the channel.

The affair was organized by Spinnaker Sailing – they offer Friday night sails as well as club memberships, bareboating, classes etc.

Yamkat has been sold. She is now in the hands of her new owners, and we wish them well. We learned a lot from her – dealing with maintenance, learning to sail her, dealing with emergencies at sea. Somehow she represented more about challenge than pure enjoyment for most of the time. Part of the reason was that we really only have one sailor in the family, and Yamkat was a handful for one person. Also I think it’s important that the whole family be excited about sailing – it’s a complex and demanding pastime with a big boat, and everyone needs to be on the same page.

But despite these caveats, we had some wonderful experiences – especially sailing to the Isle of Wight and back again over a weekend, staying the night at Ryde Harbour.

Now we’re back in California, we will give big boats a rest for a while…I have a lot of other projects to keep me busy.

But the bug is hard to shake off – we’ll see what the future brings!